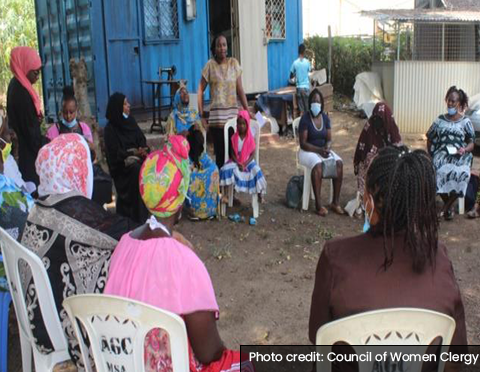 Mama Mwaka* is a 50-year old resident of Likoni, Kenya. Identified as a victim of extremism after the 2014 attack on Likoni church by Al-Shabaab, she participated in the Safe Spaces programme run by Coast Interfaith Council of Clerics Trust (CICC Trust), a GCERF grant recipient.  Harassment and unwarranted arrests of Muslim men including her own son, bred Mwaka’s resentment against security forces. She struggled to overcome these accusations of terrorism which tainted her family’s reputation.

For the Safe Spaces programme, CICC Trust hired counsellors to provide regular psychosocial care in both individual and group settings. They employed religious leaders to help demystify some of radicalisation narratives women had been told. The Safe Spaces sessions aimed to be a starting place for women, aged 18 to 60, to heal from traumatic experiences. Through this programme,  Mwaka learned about the recruitment techniques and narratives used by violent extremist groups.

One day Mwaka overheard her friend Rizki* mentioning that her son got a job in Lamu. It was this point that drew Mwaka’s attention as she learned that Rizki’s son, Abdul*, had landed a security-related job delivering documents to a location in Mombasa. Cognisant of recruitment techniques that she had learned, Mwaka informed Rizki and other women on how youth were being recruited to extremism and to Al-Shaabab through such job offers.

Mwaka approached Abdul to further inquire and learned that he had been approached at the mosque and directed to a recruiting place in Ganjoni. She educated Abdul about recruitment as a means for radicalisation and accompanied him to the recruitment place where, upon arrival, he noticed the men present were different from the ones he had previously met.

Mwaka asked whether her son may be employed, to which they adamantly responded that they recruited based on referrals. She saw other youth with their bags ready to travel, so she continued questioning and noticed that they were hesitant to answer. They made phone calls and then left in a taxi.

She warned the young people present that they were possibly being recruited into Al-Shabaab and took them to the police station where they explained the situation. The police investigated and scouted the place to see if the recruiters  would return, however, they never did.

Today, Mama Mwaka continues to talk to mothers and to young boys and girls in her area about the dangers of extremism and recruiters. She has become a peace leader in her community.

The Coast Interfaith Council of Clerics Trust was funded by GCERF from 2018-2021.

*Not their real names