Mentoring to prevent radicalisation in Nigeria: “My future is in my hands”

Mentoring to prevent radicalisation in Nigeria: “My future is in my hands” 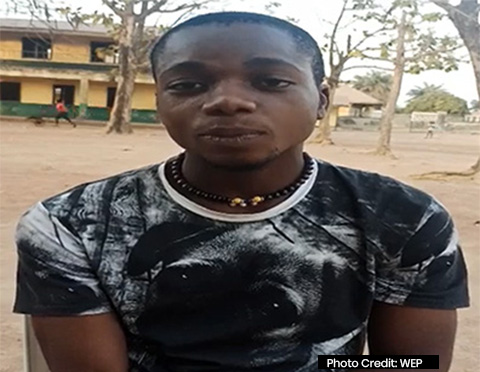 Tersoo is a beneficiary of the mentorship programme and the vocational skills intervention, run by Women Environmental Programme and funded by GCERF.

Tersoo, an only child who lost his father at age of 3, is from Adikpo in Kwande Local Government in Nigeria.

Kwande, on the border with Cameroon, is a place where Boko Haram is trying to make gains and many young people in the area are drawn to the violent extremist group by the perceived gains of becoming a perpetrator of violence.

As a teenager, Tersoo found himself in an environment driven by violent confrontations between farmers and herders. Violent extremist groups found a way into the territory and many of his peers began working with these groups as a means of survival.

Tersoo admits feeling lost and very reckless about life generally at that time. With no direction, he said working for a violent extremist group “once in a while to make some cash” was his way of life.

That was until he came in contact with the GCERF-funded programme. He said the knowledge he acquired from the interventions changed his life.

“I got so much inspiration, especially from the mentorship program which has helped me build self-confidence. I am confident that my future is in my hands and I can create a new path for myself outside of violence,” he said.

He has used his savings to start a small business. “Now I have something that can give me income and I am happy about it,” he said.

“I have been able to develop my self-esteem and self-control. I no longer feel I must be a violent person to make a living,” he said.

Tersoo is now eager to share his story to help others who are at risk of joining a violent extremist group.

“I have seen what the life of VE [violent extremism] does to young people, how it has turned some of my peers into rejects who will never again be accepted as members of our community and I won’t want to see any other young person go down that road,” he said. “If speaking to others is going to help, I will gladly do so over and over.”

GCERF has been funding WEP since 2019 to empower young men and women vulnerable to recruitment to violent extremism by providing tangible skills for social and economic advancement.