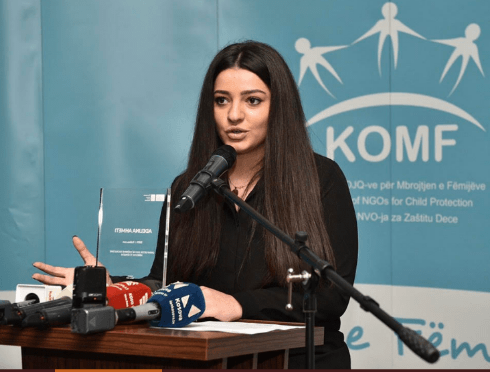 Journalist Adelina Ahmeti, 24, sees it as a social responsibility to report fairly on violent extremism.
The reporter for the Balkan Investigative Reporting Network was awarded an annual award for a series of articles she wrote on the children of returned foreign terrorist fighters who had travelled abroad to join ISIS.

“There is a very high number of children who have been born in Iraq and Syria who haven’t received any kind of education to date,” Adelina said. “Journalists should report more careful, thinking in advance what the negative consequences of their reporting may be.”

Kosovo had Europe’s highest per capita rate of people joining ISIS. Between 2012 to 2015, some 355 men, women and children, traveled to the warzone and a further 76 children were born there. While most are now enrolled in school, Adelina’s reporting showed that they had very specific needs.
Since the first cohort of foreign terrorist fighters started returning to Kosovo in April 2014, the investigative network went from town to town, assessing repatriation efforts. The GCERF-funded research revealed a lack of human resources in government centres for social assistance and unemployment. It also found that there were not enough psychologists to provide specialist care.

Women reported hostility from other members of the community and for children, Adelina found that schools would have to adapt their curricula to accommodate students new to learning.

“In a district of Pristina, there are children from 7 to 14 years old in one class and they are not mixed with other students in the school,” she said. “They are getting an accelerated programme which will bring them to the same level of education as the others.”

In other places, the Ministry of Interior has designed programmes especially for repatriated children.

“There are specific instructions given to the teachers once the repatriated children are registered in school, in order to assess the level of ability that these children have in different skills and subjects such as mathematics, Albanian literature and so forth,” she said. The teachers then monitor their progress and recommend complementary classes outside of school hours as required.

The findings in the report were used as an advocacy platform to improve the capacity of local authorities to integrate the returning population more effectively. To tackle stigmatisation, GCERF funded the investigative network to host a series of trainings for journalists, and attended by the National Coordinator for Counter Terrorism and Preventing and Countering Violent Extremism, Fatos Makoli. Their purpose was to encourage the media to use their position to make reintegration more palatable to the community, rather than “report in a way that leads to bullying of kids or that further stigmatises returnees,” Adelina said.

Winning the prize, awarded by the Coalition of NGOs for Child Protection in Kosovo, KOMF, was one of the most fulfilling moments of her career. Awarded for the social protection of children, she feels motivated to continue her reporting on the children of returned foreign fighters.

Attending their extra-curricular activities, Adelina has witnessed the children change.

“The curiosity with which they are seeing the world – the new phenomena and the new environment that they didn’t have before – observing this is so inspiring,” she said.

“Even though we are a small county and we have limited resources, we should do our best to reintegrate men, women and children in the most effective way and make them part of our society again.”