Building Trust Between Young People and Police in Kenya

Building Trust Between Young People and Police in Kenya 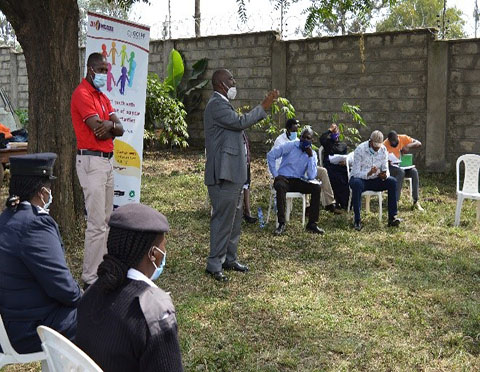 By Yuko Narushima and Nico Rapin

When reporting a crime, few would expect to be put behind bars themselves.

But this was how many young people in Kenya’s Kamukunji sub-county felt when the relationship between police and the youth were at their lowest point in July 2020, against the backdrop of the COVID-19 pandemic.

“Young people were saying they were always suspects,” Gibson Mwaita, the Consortium Manager of the GCERF-funded Jiongoze project said. “They talked about harassment by the police, being arrested and being rounded up and put behind bars when reporting crime, instead of being listened to.”

Stories like these were the catalyst for change. A baseline study in 2019 had showed that police harassment of young people, between 18 and 35, was one of the drivers for violent extremism in the community.

“Part of what was driving them to join these violent extremist and organised groups was in retaliation to what was perceived as harassment,” Mwaita, 31, said. “Young people were being rounded up just for being in groups in the playground.”

As the appeals from young people to intervene grew, the consortium of five local NGOs worked to broker a truce between young people and the police. SOWED Kenya talked to key actors, including in the National Government Administration and a Member of Parliament, and took the lead in convening what is known as a “Kikao” open-air dialogue. This gave people representing all sides the chance to air grievances and start finding solutions.

“The young people got to speak out about some of the things that were being done in the community that they felt were really fueling the conflict between police and young people.

“For them to feel safe, in terms of even coming to the police station, they wanted to feel like they had a go-to person,” Mwaita said.

The police listened and took action. They took recommendations generated at the open-air dialogue and by the following month, the police station had created the position of Station Youth Liaison Officer. The two selected officers, chosen against strict criteria, were male and female, below the age of 35, known for their empathetic dispositions and being friendly to youth.

Defence Kale, one of the young constables to fill the newly created post at the Shauri Moyo station said the rapport between police young people was now “excellent”.

“The youth are becoming friendlier to police officers and they are willing to give information on what is happening in the community,” Kale, 31, said.

This, in turn, has improved her ability to police, with young people trusting her with information on planned crimes that police are able to thwart now as a result.

The success of the programme has snowballed. Nearby Buruburu police station assigned their own Station Youth Liaison Officers and a roll-out of the newly created programme is now underway nationally, starting with 11 pilot counties, including the capital city of Nairobi.

The Executive Director of SOWED Kenya, Karanja Muraya said, “We already had a series of meetings with the National Police Service – including the Directorate of Counter-Violent Extremism and Organised Crime, Directorate of Reforms and Directorate of Community Policing  – and the REINVENT Programme to discuss the terms of reference and standards of procedure for the SYLOs [station youth liaison officers] and the training materials.”

Furthermore, the initiative has already yielded results on the broader mission of preventing violent extremism.

“We have seen reduced cases of violent extremism in the communities in Shauri Moyo and Kamikunji and Buruburu based on the reforms,” Mwaita said, based on anecdotal feedback received so far. A similar sentiment has been echoed in national counterterrorism data, according to Muraya.

“Looking at the data from the National Counter Terrorism Center, it indicated that Kamikunji has recorded a significant decline in the number of people who are crossing over to Somalia for training,” Muraya said.

Back in Shauri Moyo, police are now invited to join youth initiatives in the community such as sporting events and tree plantings.

SOWED Kenya is currently developing a memorandum of understanding with the National Police Service and other relevant agencies to ensure the longevity of the programme and deepen its impact at the national level.

GCERF has been funding the Jiongoze project since 2018. The five NGOs that form the consortium are Docubox, Eastleigh Youth Forum, I Choose Life, SOWED Kenya, Womankind Kenya.