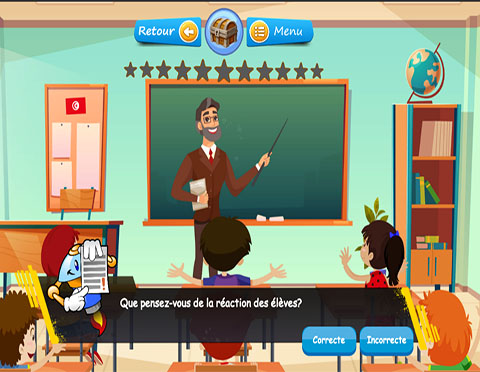 Like many of their peers, young Tunisians are fond of social media and YouTube. However, surfing the internet can turn out to be a perilous activity when you do not have the knowledge and experience to assess information properly. A vulnerability that local violent extremist groups exploit to spread their propaganda, radicalise, and recruit young men and women.

“The majority (of children) have been indoctrinated via social media, notably propaganda circles,” confirmed Mohsen, a teacher working in the governate of Madhia with students between five and twelve years old. When exposed to extremist narratives, youth do not always have the capacity to question the information and have a tendency to accept a message because it comes from an adult. “Students in rural areas are more vulnerable to any type of speech imposed by parents or a person with authority over the child,” said Mohsen. “Critical thinking does not even exist.”

To strengthen youth resilience to online radicalisation, the Applied Social Science Forum (ASSF), a GCERF-funded NGO in Tunisia, is developing a solution that capitalises on the students’ interest in online content. The Tunis-based organisation, in collaboration with 60 teachers and school psychologists, is creating an educational video game to foster students’ critical thinking by encouraging them to make thoughtful decisions.

Designed for 11 to 14 years old children, the game, named “Parallel”, can be used as an entry point to sensitise students and introduce prevention in schools. “We can start debates from this game,” said  Manel, a school psychologist who has been collaborating with the ASSF since 2017. “We can use Parallel to really approach a subject. To tackle this type of subject which seems a bit taboo.”

“At first, students are more interested in the form (the game) than the content, but after several uses, students have learned morals that they can apply in real life,” said Mohsen, who has already tested the game with his class.

The ASSF has signed a memorandum of understanding with the Ministry of Education and is now discussing how to scale up the project with the National Centre for Technologies in Education (NCTE). The NGO is also working on other digital tools that could be used to foster youth resilience to violent extremism, such as a chatbot that will enable parents to identify early signs of radicalisation.